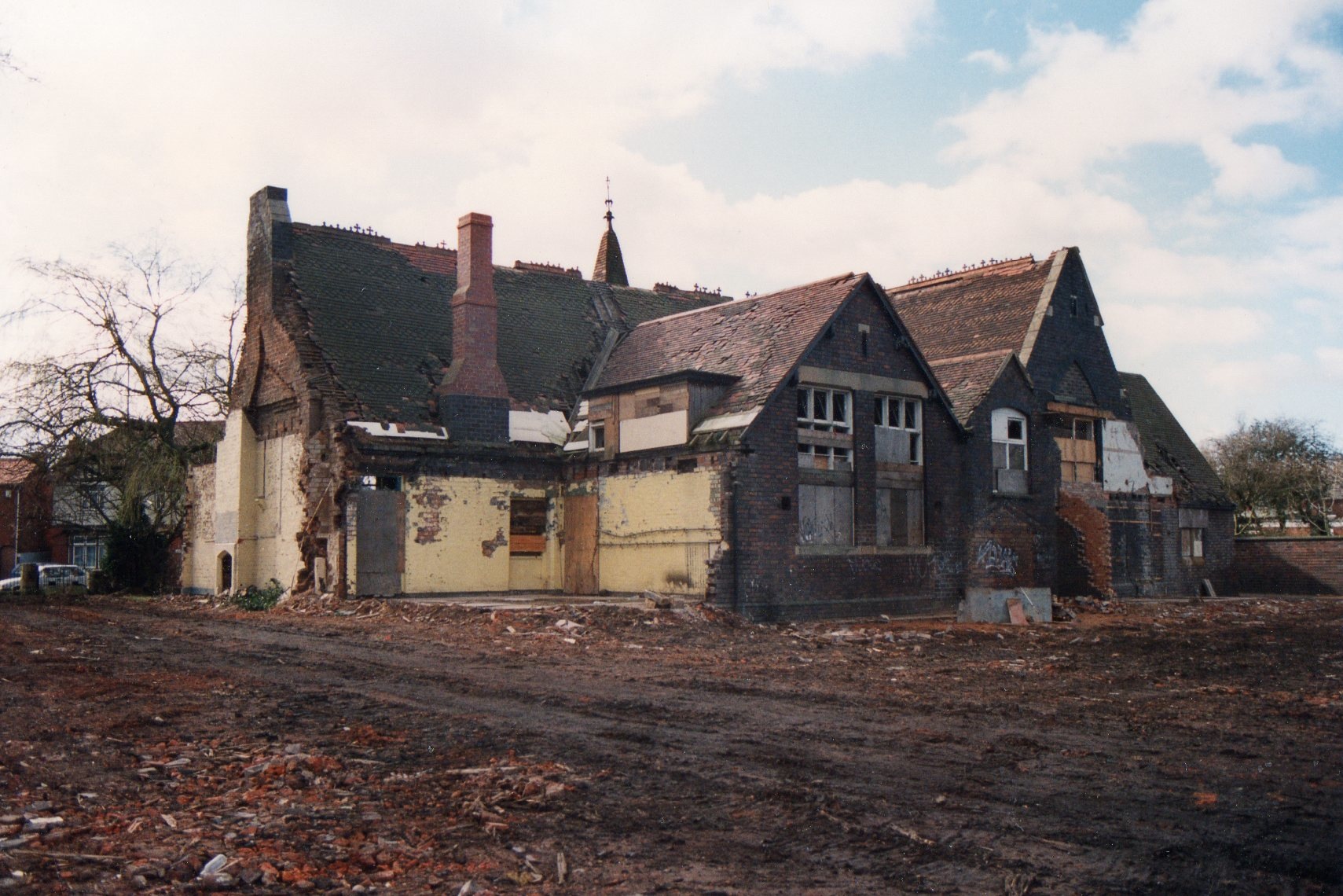 Demolition of the old schools

The part of the school building which had originally been the Infants’ School was demolished to make way for Belfry Drive.  This gave access to the housing development which took place on the school playing field.  The chimney and window were reinstated in the altered building which now houses commercial operations.

Looking at this picture whilst on nights brings back lots of memories of the old school for me.  I only attended the school for about 6 months to a year in about 1980/81, as was the one up from Meadow Park, where all my friends I had grown up with went to.  My parents then believed that Brindley Heath Junior school Kinver would give my brother & I a better education as there was apparently less pupils there.  Wollaston St James was a good school from what I can remember, although mess about & you might have had the board rubber thrown at you by Mr Walker.  I remember the Christmas fayre at the school & santas grotto in the courtyard (& always getting felt tips & colouring book), & also hearing about other pupils having their heads flushed down the toilets.  Also remember having a fight in the courtyard & being held up on brother’s friends’ shoulders.  Remember being in Mrs Edwards’ class & also having bottles of milk & a biscuit at break time.  Also remember another female pupil who had to go to bed during the day, whilst in class which we all thought was a bit weird.  Also remember Mr Smith Pe teacher at the rear of the school doing pe.  Also remember playing in the field at the back of the school & seeing the big ferris wheel from (believed) Thomas Jones fun fair on ‘the rec’.  Also remember there being a walnut tree near to the school.  I always remember the massive weeping willow outside the front.  I also remember going accross to the ‘tv room’, which I believe used to be the head’s house to watch Jesus Christ Superstar probably on video/betamax.  Also remember all of us going accross to St. James church at harvest time, when we all walked over together.  Must admit that I found it was really sad when most of the back end of the school & the old glass hall (think was 50’s/60’s building actually) at the back was demolished but that’s progress I suppose..  I had some good friends at the school, & am now 40 years old & have my own family.  Best wishes Andrew Potter. (former Apley Road Wollaston resident)

Hi!
This brings back memories…was at St James mid 50s to 1960, i.e from Miss Fisher to Mr Pearson in the days of Mr Troughton. So many memories - one main one is that as I lived in Hyperion Road I lived in Staffordshire, and Staffs kids took the eleven plus early, so while everyone else was doing games or art i used to sit by myself in the classroom doing inteliigence tests which, I recall, were kept in a large OXO tin. Remember the dreadful school meals in those big metal containers, oh yes, and Mr Pearson’s kiln..happy days…