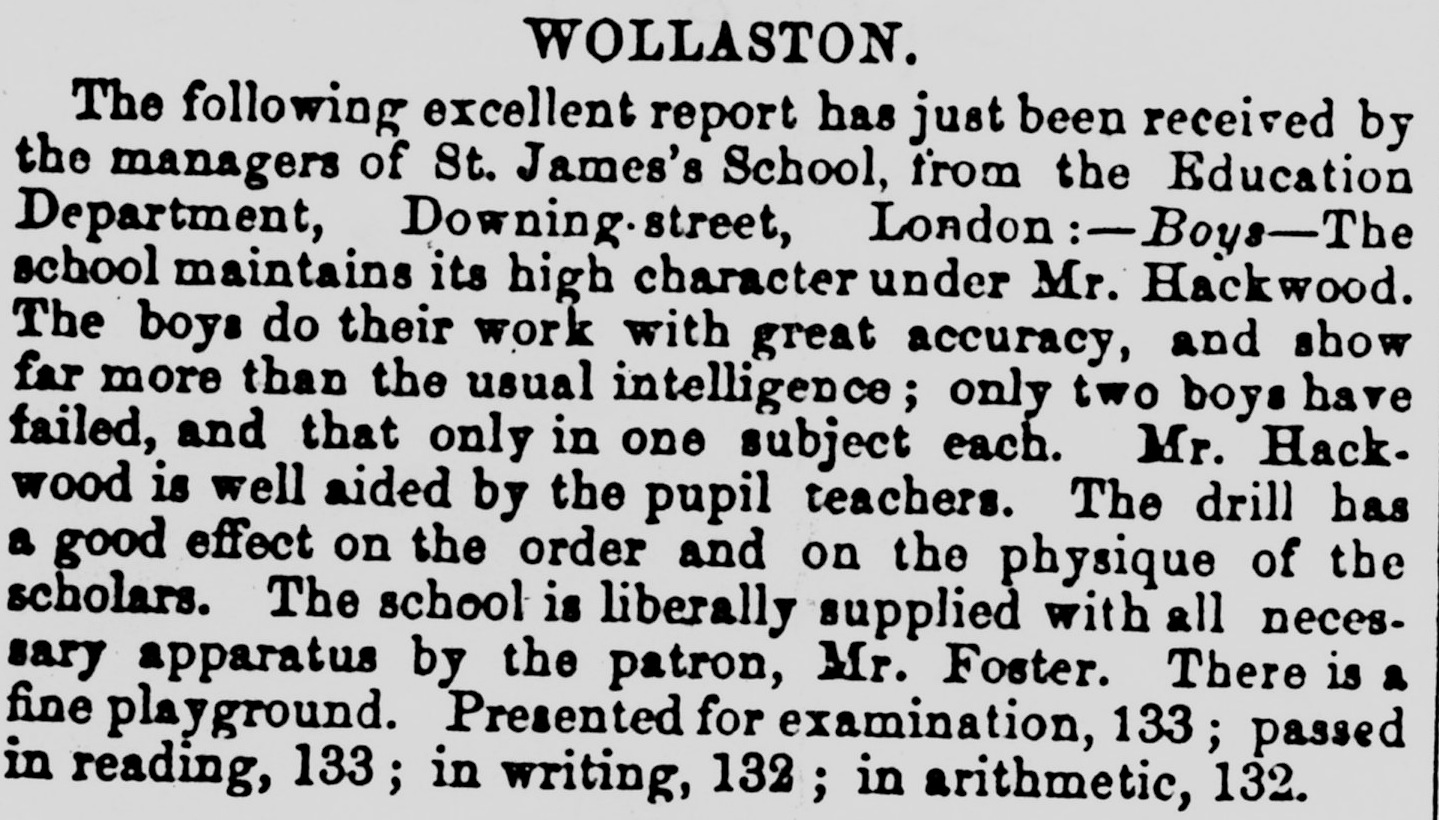 This quotation from the Brierley Hill Advertiser, dated 8th September 1866, was a glowing report on the standard of education in the Boys’ School under the headmaster Edward Hackwood.  In the following edition of the paper a letter was printed above the signature ‘Charity’.  The omission of any reports about the Girls’ and Infants’ Schools had obviously annoyed someone.  It read: ‘Sir - Allow me to complete the one-sided report which appeared on the 8th, by stating that the schools in connection with St James’s Church consist of boys’, girls’ and infants’ schools; and that the reports received from Downing Street on the girls’ and infants’ schools were as excellent in degree as that received by the boys.’

Previous: The retirement of George Whitmore

Pretty straightforward.  It obviously depends on the standard of living you want to have but for me if I decide to fight MMA I understand that I’m going to try to get by on as little as possible.  Do most fighters who have day jobs work part time?  And if you’re a fighter who works full time do you feel like it has a negative impact on your ability to train effectively?. https://0-kcal.com

Prior to you decide to create your own checklist to include an idea associated with what camping checklist ought to. Really … A listing can be more than what you need. 메이저사이트
=================================================================================
An impressive share, I with all this onto a colleague who had previously been performing a small analysis for this. Anf the husband in truth bought me breakfast due to the fact I found it for him.. smile. So permit me to reword that: Thnx for that treat! But yeah Thnkx for spending plenty of time go over this, I feel strongly about it and adore reading much more about this topic. When possible, as you become expertise, might you mind updating your site to comprehend details? It can be highly great for me. Massive thumb up just for this text! 청주출장안마

I do believe all the concepts you’ve introduced for your post. They are very convincing and will definitely work. Still, the posts are very short for beginners. Could you please prolong them a bit from next time? Thanks for the post. Daejeon Business Trip Massage

I really wanted to make a brief word to say thanks to you for all of the amazing points you are sharing at this website. My time intensive internet lookup has finally been honored with really good facts and strategies to go over with my colleagues. I ‘d claim that we visitors are rather fortunate to dwell in a remarkable website with so many lovely professionals with valuable guidelines. I feel somewhat fortunate to have encountered your entire site and look forward to plenty of more exciting minutes reading here. Thanks a lot once again for a lot of things. major playground